The Beast Out of the Sea; Principalities and Powers

In the second part of the series we are going to take a closer look at the beast out of the sea and discuss why it needs someone to speak for it and who or what it actually is. Though the answer was in plain sight, it took a lot more flipping through the Bible than we have encountered in our past studies. Now we will present what we have found; the beast behind the kingdom…

It had always seemed strange that Daniel 7 would have God throwing the fourth beast (a kingdom according to Daniel 7:23) into the burning flame. We are told in verse 11 that it has a body. This presented quite the conundrum because we ordinarily don’t think of a kingdom as possessing a body. This same thing was reiterated in Revelation 19:20. It along with the false prophet (Antichrist) were thrown into the lake of fire. After thinking and praying about this for some time, a verse kept coming to mind again and again:

For we wrestle not against flesh and blood, but against principalities, against powers, against the rulers of the darkness of this world, against spiritual wickedness in high places.

In a few passages in the books of Daniel and Revelation we see these principalities depicted and, though they cannot be seen with the naked eye, we are told they are wreaking havoc in the spiritual realm. Look at this passage in Daniel 10…

“Then said he unto me, Fear not, Daniel: for from the first day that thou didst set thine heart to understand, and to chasten thyself before thy God, thy words were heard, and I am come for thy words. But the prince of the kingdom of Persia withstood me one and twenty days: but, lo, Michael, one of the chief princes, came to help me; and I remained there with the kings of Persia.”

Speaking to the prophet Daniel, the angel Gabriel tells him that he was delayed in answering his prayer for three weeks because he had to battle the prince of Persia. Now at first glance this looks really strange; is this a picture of an angel battling a human prince as the ruler of a kingdom? No. Looking deeper we see this obviously is not the case. No human could endure fighting for 21 days! The prince of Persia is a principality (a spiritual entity) whose realm is over the Persian region of the world. At the time, Persia was the main power in the world and ruled over the Jews. Persia came into power as an empire in 539BC when they conquered Babylon. The Persians remained in power for about 200 years until defeated by Greece (see Daniel 8). This same passage in Daniel 10 describes Michael, the arch angel, as a chief prince. This is further proof of spiritual battles going on in high places, aka, the spirit realm.

Spiritual entities existing over kingdoms is not without strong precedence, not just from what we read in Daniel, but also from Deuteronomy 32 and how it relates to the Tower of Babel in Genesis 11. At the Tower of Babel, God came down and confused the language of the people. We don’t really get the full impact of this until we read in Deuteronomy 32:8-9, “When the Most high gave to the nations their inheritance, when he divided mankind, he fixed the borders of the peoples according to the sons of God. But the LORD’s portion is his people, Jacob his allotted heritage.”

The Lord disinherited all of those nations as his people and chose only Israel as his own. God divided the nations of the world at the Tower of Babel and placed each one under the authority of members of Yahweh’s divine council. We would recommend you read Michael Heiser’s excellent work, The Unseen Realm, to gain a larger understanding of this. Suffice it to say, each nation had a spiritual entity ruling over it.

Let’s now turn our attention to the Greek word for principality in Ephesians 6. The word arché is translated “principalities” which finds its origin in the Greek word, archó, which means ruler. The Greek Septuagint (Greek Old Testament) word for prince in Daniel 10 uses the word archon which is defined as a “ruler” or “chief”. All of these words are directly related to each other in Greek and can mean either humans or spiritual beings. It is the context of the passage that determines which type of ruler it is. In the case of Daniel 10, each use of the word archon is related to beings in the spirit realm.

And when they shall have finished their testimony, the beast that ascendeth out of the bottomless pit shall make war against them, and shall overcome them, and kill them.

Our focus should be squarely on this beast. He ascends out of the bottomless pit and makes war against them. This is obviously not a human, nor is he Satan for Satan does not reside in the bottomless pit at this time; this is someone else entirely, but who? If we move to Revelation 17 we get yet another clue as to who this spiritual being is…

The beast that thou sawest was, and is not; and shall ascend out of the bottomless pit, and go into perdition: and they that dwell on the earth shall wonder, whose names were not written in the book of life from the foundation of the world, when they behold the beast that was, and is not, and yet is.

Both Revelation 11:7 and Revelation 17:8 are describing the same beast that ascends out of the bottomless pit! Furthermore… we can finally connect these passages back to the First Beast of Revelation 13, who comes up out of the sea. Remember that Revelation 17:8 tells us that the beast was, and is not, and yet is. Looking back at Revelation 13 helps us to connect the dots to discover the nature of the mortal head wound and the beast’s recovery. This powerful beast was a major ruling principality; he had a mighty fall (shortly after Greece defeated Persia), only to regain power in a major way while capturing the world’s imagination through the powerful kingdom he ruled in the spirit realm. Stumped as to who this entity is? We were too, but the great thing about Scripture is that all the clues are there!

To find who this entity is we have to go back to the first appearance of the words “bottomless pit” in Revelation. We find it in Revelation 9 during the 5th trumpet judgment and we find out who the being is down to his name…

And they had a king over them, which is the angel of the bottomless pit, whose name in the Hebrew tongue is Abaddon, but in the Greek tongue hath his name Apollyon.

This passage in Revelation connects with the other descriptions of the beast in Revelation 11, 13 and 17!! The angel over the bottomless pit is none other than the beast that was, is not, and yet is. His name is Abaddon in Hebrew which means destruction, but this is where things get strange. John was told to write the Greek counterpart name for him even though he would be writing the book in Greek. The Greek name he was told to write was Apollyon which is not a word-for-word swap of Abaddon. Whereas Abaddon means destruction, Apollyon means destroyer and more to the point, is connected to the English name Apollo, the sun god of the Greeks!

This is a very interesting find in that Jesus himself is declared to be the Sun of righteousness in Malachi 4:2 and will bring healing in his wings. The antithesis of this is found in Satan’s man, Apollo, the sun god who brings destruction. This is the god of forces that the Antichrist/little horn worships as mentioned in Daniel 11:38 and is the very being we see mentioned just a chapter earlier in Daniel 10…

“Then said he, ‘Knowest thou wherefore I come unto thee? and now will I return to fight with the prince of Persia: and when I am gone forth, lo, the prince of Grecia shall come.”

Gabriel explains to Daniel that he had to go back and continue his fight with the Prince of Persia and he would be defeated as seen in Daniel 8 when Greece took out the Medes and the Persians.

Let’s look at the same scripture in the NIV. It says, “Do you know why I have come to you? Soon I will return to fight against the prince of Persia, and when I go, the prince of Greece will come; but first I will tell you what is written in the Book of Truth. No one supports me against them except Michael, your prince.”

It is important to understand that Gabriel is going back to fight against the Prince of Persia; why? Because there is always spiritual warfare going on in the spiritual realm. Notice that the prince of Greece would come later. This is because Greece was not the world power at the time. This passage in Daniel indicates that the Persian world power would be defeated by Greece and that the Persian prince would be defeated and be vanquished, giving rise to a new principality/power who is the prince over Greece. That Prince over Greece is none other than Apollyon, the destroyer, who is Abbadon, ruler of the bottomless pit.

In history we see that Greece was defeated by the Romans. At this point the Archon over Greece, Apollyon, would have been replaced by the new Archon over Rome. Did Apollyon, upon his defeat, get sent to the abyss? That is our contention. There is some ambiguity on the actual timing of his release from the abyss and we will leave that to the reader to speculate. What we can determine is that this beast Apollyon once was (ruler over Greece), now is not (at the time of the writing of Revelation, Greece was not in power – Rome was), but shall ascend out of…(future to the writing of Revelation). This comports with the description of the mortal head wound of the First Beast of Revelation 13 as a kingdom and as a Prince/Archon. In other words, Greece had a mortal head wound and so did the ruling Prince of Greece. In the future, this mortal head wound appears to be healed and people are astonished at the beast. Who exactly is this Beast that comes back? It is not an apparent death of a human person who “resurrects” as many popular authors have maintained. It must be a second appearing of “Greece” ruled by Abaddon/Apollyon in the spirit realm…. That will be tackled in our next article in this series.

Circling back to the beginning conundrum of how can a beast kingdom be thrown alive into the lake of fire, we now have a satisfying answer… If as we contend, the First Beast of Revelation 13 is a kingdom and not the Antichrist, and if the Second Beast of Revelation 13 is in fact the Antichrist and the False Prophet in one, and since we now have shown that the First Beast (the kingdom) has a spiritual Prince or Archon ruling it, we can clearly understand this passage in a better light: “And the devil, who deceived them, was thrown into the lake of burning sulfur, where the beast and the false prophet had been thrown.” – Revelation 20:10. The unholy trinity is made up of the devil, the First Beast of Revelation 13 (a kingdom and a spiritual entity/ruler) and the Second Beast (False Prophet and the Antichrist… one and the same person). So we conclude that the casting of the beast into the lake of fire does not indicate a kingdom being thrown alive into the lake of fire, but rather the spiritual ruler behind that kingdom… namely… Apollyon. So we know the eventual destiny of Satan, Apollyon, and a Man…. the Antichrist. 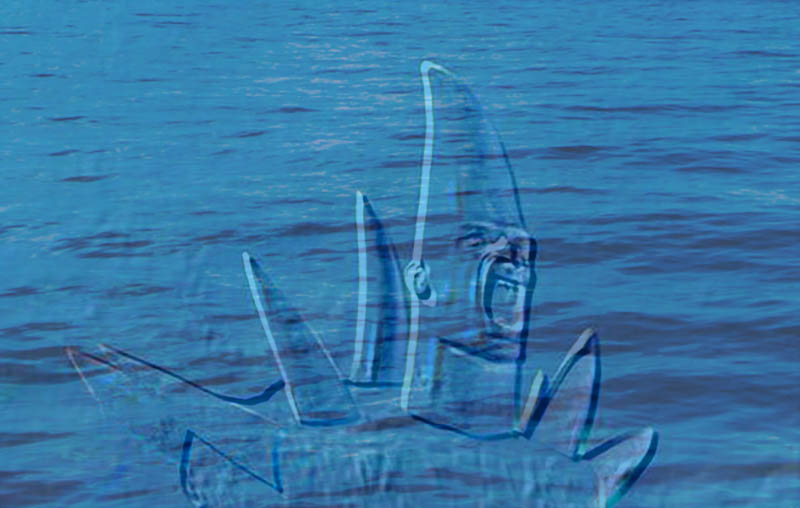 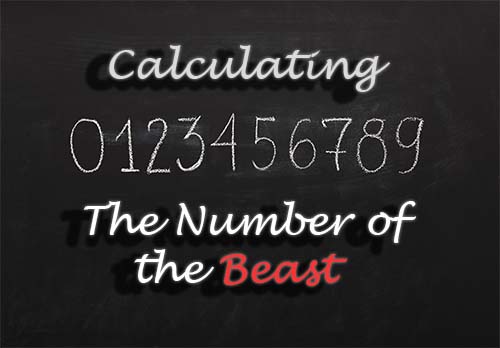 Mark of the Beast; Number of a Man